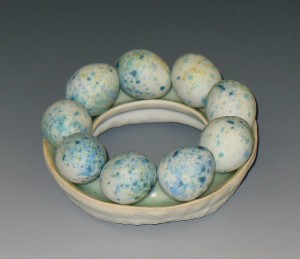 A lifelong resident of Dallas, Texas, I have  BFA and MFA degrees from Southern Methodist University, concentrating in painting, printmaking and drawing. After graduation I continued to teach those disciplines for many years in Southern Methodist University’s Continuing Education department, as well as in the Fine Arts department as adjunct faculty. or 35 years, I have had some wonderful detours offered by volunteer opportunities presented through the interests of our three children. Among those were years of theater design and production, robotics competitions and literary festivals.  For many years I balanced art alongside versatile work in my family’s business – a small surgical hospital.
I have always been interested in color and form studies, as well as pattern, previously working in the representational realm of still life and landscapes painted “on site”.  Recently, I have extended this inquiry to ceramics, at first focusing exclusively on functional work .  My work in clay has been guided by excep

tional faculty at Brookhaven College in Dallas and Anderson Ranch in Colorado.  While I continue to make cups and a few other objects for the table top,  I am also making forms for purely visual exploration,  with a departure point informed by natural objects such a seashells and other organic forms.  Firing some of the components in atmospheric kilns seems to be particularly conducive to realizing the surface and random patterns that I am chasing.

1983-1995 Instructor of Painting and Drawing, S.M.U. School of Continuing Studies

ANYTHING 2D, University of Wisconsin